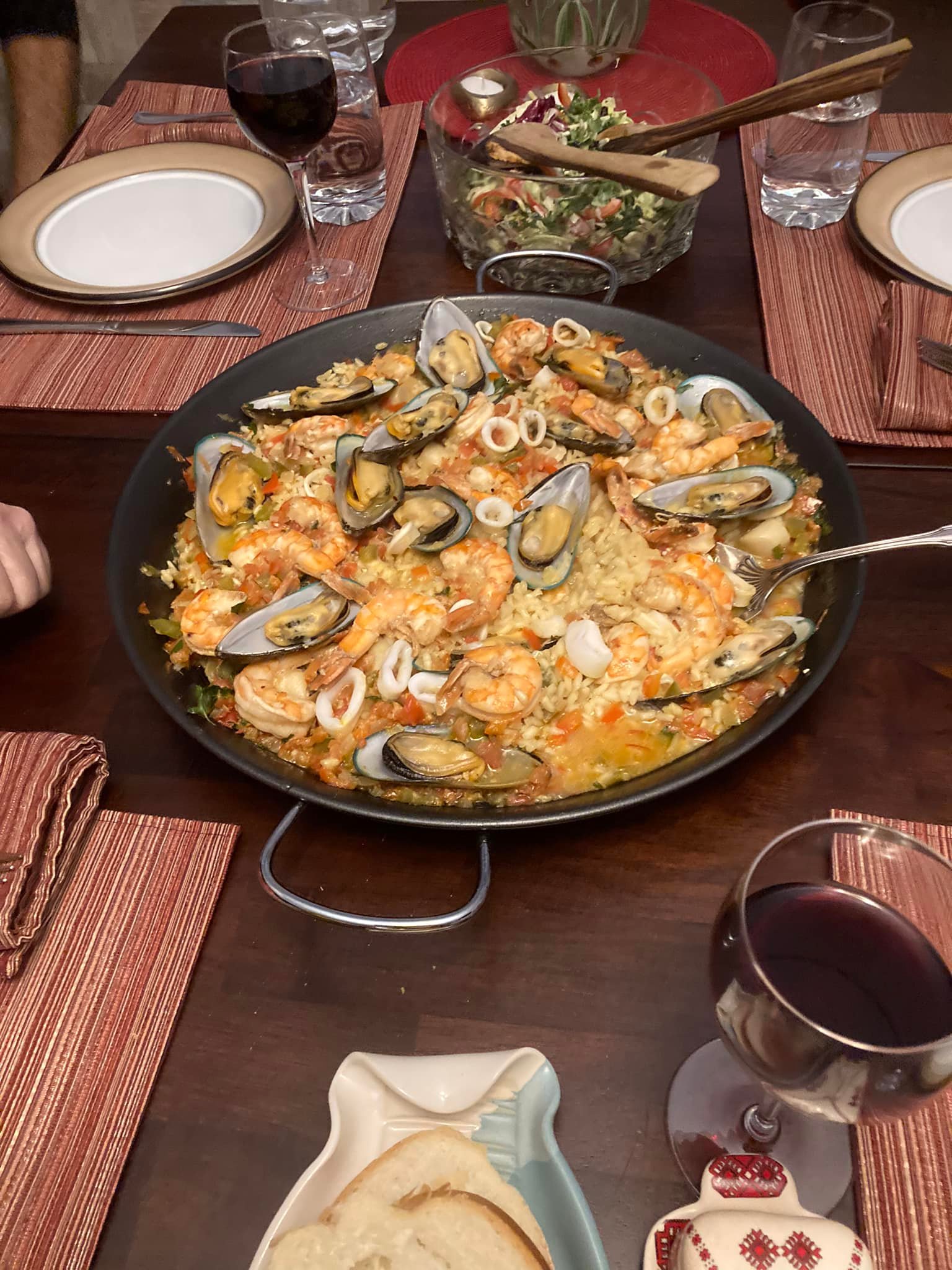 By Pilgrim LindsayMarch 27, 2022General, March to Santiago, Newsletter
No Comments

Greetings From Camino for Good

As admin for the Camino for Good Cafe Facebook group It’s my great pleasure and honour to have met many people from all over the world undertaking the Virtual Camino Journey. You all are inspirations. One very dedicated pilgrim is Joy Turner from Saskatchewan who has been most generous to share some of her Facebook posts to the world.

For someone like me who lives in the tropics of Far North Queensland in Australia, I have no concept of what Joy has endured in the cold cold Canadian winter. Joy is definitely one of my main motivators to get out and do it. You will see that Joy celebrates in style. Follow her journey with these snippets from her posts.
Buen Camino Lindsay

I arrived in Santiago two days ago after ‘braving the hills’ on the Camino del Norte. Even though it has been a chilly winter walk for the most part, spring is slowly arriving. A fickle spring with some days sunny and warm while others remind you that it’s not over yet. I’ve had my last walk on the frozen lake as it’s beginning to thaw (got a shoe full of freezing water the other day) and the snow on the road is melting so I can even walk on dirt! The last 4 km were cool and windy but I warmed up by making a seafood paella to share with peregrina Sheila White. I had hoped to make this when Sheila finished in December but life intervened as it often does.
I am so thankful to Camino for Good and all the pilgrims for supporting our walks and for sharing stories from wherever you are in the world. I keep learning from you. This is my third time reaching Santiago and I think I am as excited as I was the first time. So off to catch that virtual bus back to Burgos and start walking the Camino Frances where I left off in October.
Buen Camino!

The winter that keeps on giving. Spring is just around the corner but hard to see at the moment. We keep getting snow and wind and cold. It’s all this snow that has been so surprising. But after a few years of drought-like conditions it’s all good. They say the cold doesn’t bother you as long as you make good clothing choices. Oops, made a rookie mistake today and should have had an additional upper layer in the -33C windchill. But it was sunny and I stopped to make a snow ball to throw at Lindsay Teychenne who was just ahead of me. I thought it would provide him with some relief from the North Queensland heat and humidity. Facebook tells me that four years ago I was in stuck with our Aussie friends in Trebonne, QLD trying to reach their home near flooded Ingham.
Still on the path to Santiago. Buen Camino.

My annual CfG Report. January 15 marked one year of walking as a part of this wonderful, supportive group. I’ve walked 1,750 Km on the Camino Frances, the Finesterre/Muxia route and the Camino Del Norte. Last January I never thought that one year later I would still be walking virtual Caminos and we would all be still gripped by a global pandemic. Last January I never thought I would want to actually walk a Camino; this year I’m planning what to take. I’m still not sure when I will be able to go.
I also didn’t think I would have logged all these kilometres outside. From plus 35C to minus 35C (plus often many more in windchill ) it has required a number of clothing adjustments.
I’ve walked alone; I’ve walked with family and friends; and I’ve walked with CfG pilgrims Sheila White, Susanne Voetmann and Judy Reano and David Reano. And I’ve walked virtually with all of you. I’ve learned from all of you.
I’ve listened to Camino podcasts, read books about the Camino and been part of zoom presentations. It really has become part of my everyday life. I can’t imagine a day without walking, but have had a few recently due to cold or the amount of snow. I’ve just asked a friend if I may try out her snowshoes. That might be an answer. And I might visit my local indoor track as it would be nice to just walk, without freezing or worry about slipping. We’ll see.
So after a year here are some more winter pictures: the lake has lots of snow drifts; the winter road has deep ruts; the fishing shacks are out; and I’m trying to learn how to use my walking poles.
Thanks to everyone for your support and for always walking.
Buen Camino.

I realized how brutally cold it has been when I was so happy to see that it had warmed up to -24 this morning. And it got warmer still so I could have a good long walk with no frozen toes or fingers. I have reached the halfway point of the El Norte! I’m including some pictures from last week when we went out to the cottage to dig out from the snow. I tried to convince the deer to leave some food for the birds. Happy 2022 peregrinos! Buen Camino

I took a few days off walking to go skiing at beautiful Lake Louise, Alberta in the Canadian Rockies. It’s a 950 km drive from where I live, but was so worth it. Lake Louise has had a very abundant snowfall early this winter season and as it’s been two years since we hit the slopes it was so worth it. It was very snowy the first morning but gradually cleared. The views from the top were spectacular. And so was our skiing. I only registered one face plant.
I’m back home and back walking…. Buen Camino.

I’m feeling particularly grateful this past week for the beautiful autumn weather on the Canadian prairies. (I know what’s coming…) While there has been a coolness in the air, the days have been sunny and dry, with a background soundtrack of hundreds or thousands of migrating birds as we are right on the North American Central Flyway. The geese are the loudest and most common. I am also grateful I live so close to Wascana Park to see the migratory birds, but also to have found a lovely 4 km route along the lake to my mom’s new residence, rather than walking 1.5 km along the street. Today I visited a new exercise area that opened in this park. I’ve been watching them build it for weeks. I’m not so sure about the timing of this at the end of October. ( I know what’s coming ) So I guess I might have an outdoor gym, to accompany the hill climbing. Buen Camino.

Not much time for walking this week as we’ve been moving my mom from her house to an assisted living apartment. It has all gone well and the weather has stayed nice (except for a few snow flakes one day ) But there is always something new to see on my regular routes, like a fox lounging on a neighbour’s driveway on my mom’s street. I noticed that the rabbits and partridges were nowhere to be seen with the arrival of the fox.
As I slowly make my way along the del Norte I’ve climbed a few hills at our lake. At the top of one was a small vegetable stand. Looks like I missed the choice beets! (not a fan of beets. Just like Sheila White).
I just joined the Meseta by the Sea group and looks like Lindsay is in San Sebastian as well! Buen Camino.

I’ve had some nice surprises walking my regular routes recently. Last week I watched some people trying to rescue an injured Swainson’s Hawk to transport it to a local bird rehab centre. Today when I reached the top of the hill in my urban park there was a young man who said “Can I ask you something?” I said “sure”. He said “Is that a moose on that island?” Well, not the question I was expecting. But it was indeed a moose. The young man was from the northern part of Saskatchewan where moose are more common. They have been moving further south over the years, but rarely into the centre of a city. I was so excited. I told him that someone had posted a picture of a moose swimming in this part of Wascana Lake about 2 months ago. I wonder if it had been living on that island since then. He couldn’t believe we had moose this far south. Several years ago I saw a young moose run down my street. I thanked him profusely and tried to take a decent picture on my phone from far away. The virtual Camino still has a few surprises left. Buen Camino.

I’m so happy. There’s a new peregrina in town. Please welcome my dear friend Sheila White, who joined Camino for Good last week. Sheila walks every day, rain or shine, snow or sun. She has already logged many kilometres with me over the past few months on my own trek. Today we walked together. What I love is that Sheila is virtually at the beginning of the Camino Frances and I’m virtually looping back from Muxia to Santiago. It is so wonderful to have another CfG pilgrim on the Saskatchewan prairies. Buen Camino.

It’s a wrap. I finished my Camino yesterday by walking the final few kilometres to my daughter Vanessa’s house. She made us a most delicious paella served with a Spanish Rioja. That proves I’ll walk a long way for a good paella.

When I started this journey in January I had no idea what a wonderfully engaging experience that this would become. I thought I would walk to motivate myself to stay fit during the pandemic restrictions and help pass a long winter. And then I met all of you, and heard your stories of real Camino walks and adventures, and saw your images taken of your virtual walks. I learned so much about the Camino and the current plight of the albergues, got to know many of you through your posts and discovered books, podcasts, and movies that furthered my understanding of pilgrimage. The weekly meditations helped me to think more clearly about my life. It became not just a physical journey, but an emotional one, too.

I’m very lucky to live by two lakes, one in the city, the other in the country. The lakes served as a backdrop for many of my walks, either by or on the water. I walked when it was colder than -30C and warmer than +30C. And like a true Canadian prairie gal I found I prefer the colder option. And I do love my own personal Meseta.
This past week had a few unexpected turns, including a rather vicious storm that dumped significant rain in a short period of time, flooding streets and unfortunately my daughter’s and mother’s basements. From drought conditions to pools of standing water. Was this a sign?
Like many others I can’t bear to finish. A big thanks to the CfG organizers and all of the peregrinos for sharing and supporting. I can’t wait until I can virtually follow many of you on your real Camino, which I hope comes soon. I’ll be there some day. A little later down the road.

Very special thanks to Joy for her sharing and her inspiration.
Buen Camino – the Camino for Good team