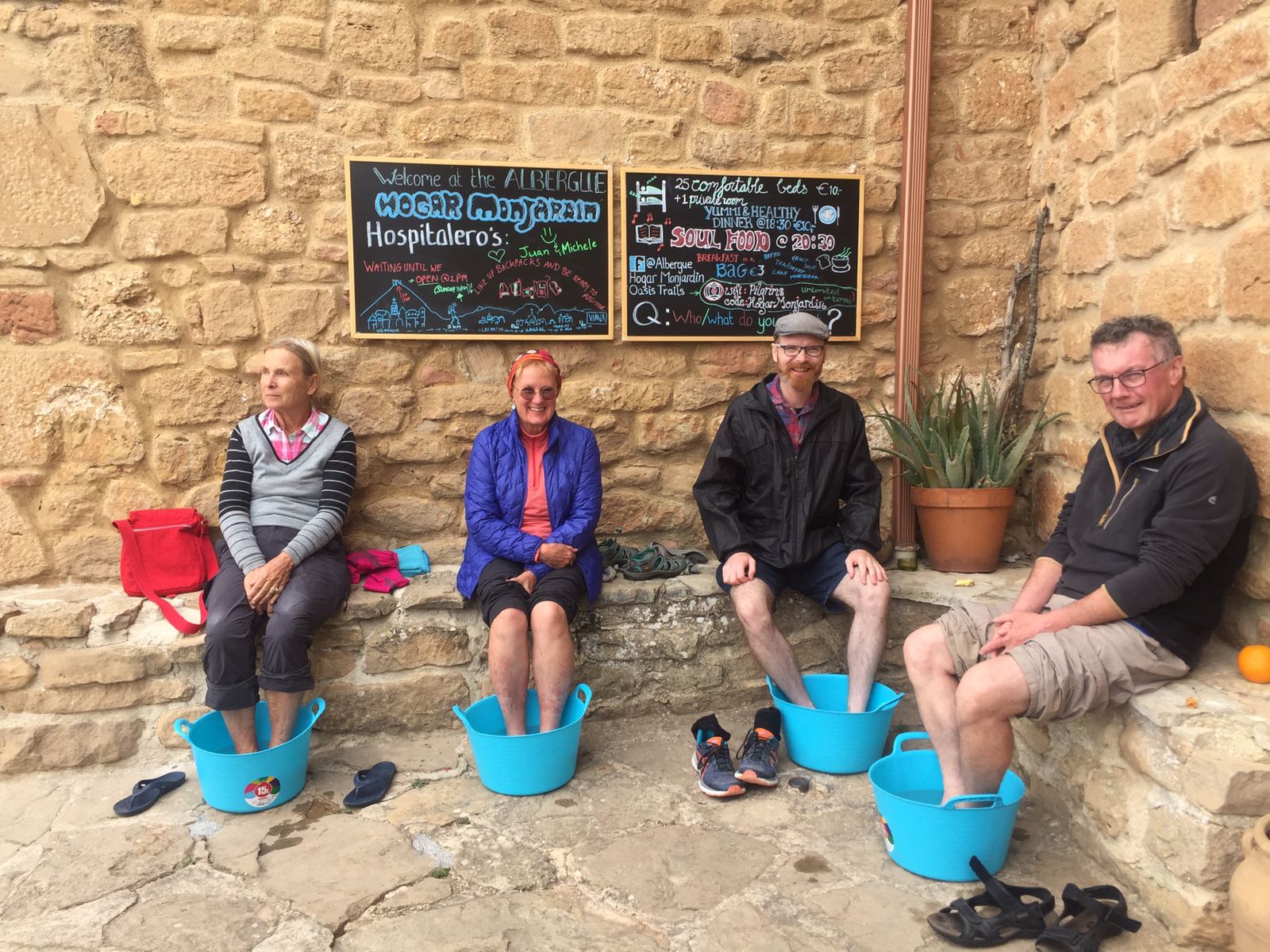 The spirit of a hospitalera, through the words of Jan Bouwman from Oasis Trails

By caminoforgoodApril 2, 2021Albergue, Newsletter
No Comments

Thanks to the Camino for Good community, we were able to provide relief funds to Jan Bouwman at Albergue Oasis Trails

Read about our communications with Jan below, a bit of insight into the relief fund process

We really appreciate you and hope that also when there are very few pilgrims we can continue to rent the albergue. Last year ate away our reserves. We were open for 4 months and received only 400 pilgrims. The connections were very beautiful though. And this year we want to function and help pilgrims in any way. We already hosted a pilgrim in our private home. She was walking from Belgium and was looking for accommodation. So regardless of finances our hearts are there to serve those souls in need of love and care.“

That was the first message we recieved from Jan Bouwman of Albergue Oasis Trails in Villamayor de Monjardín (Navarra region of Spain) along the Camino Frances. Pilgrims were not coming, her savings were depleted, and still she saw beauty in the few pilgrim connections they were able to make.

One doesn’t start an albergue to become monetarily rich. They do it to serve. To be there when that pilgrim arrives, probably limping, for sure dirty and a bit smelly, hungry and tired. They take them in. They restore their strength, mend their souls and aching bodies. Give them hope to continue on their journey for one more day.

In return they recieve something more precious to them than money. They recieve the heart warming feeling of giving. Its why they do it. Their souls are fortified every bit as much as the pilgrims they serve.

What worries these Albergue owners the most is the real possibility they might not be there when the pilgrims start coming again and need them. They arent as much worried about themselves as they are for the pilgrims. It’s an amazing thing if you think about it. The call to serve and the ability to serve is what motivates them and what they fear the most of losing. It’s the fear of this that enables these fiercly proud, independent people to reach out for help even though it’s not in their nature to ask for it and it’s why all of us here at Camino for Good, with your help, feel so proud and humble when we are able to help them.

This was Jan‘s second message we recieved 3 days later after we had reached back out and asked for more specifics on what exactly they would need to survive until the Spring.

“To be honest I think we will not open by April 1. We hope to be able to start welcoming pilgrims by June. Maybe in a minor degree per half May. For now until half April the province of Navarra will remain closed.

We are all looking forward to seeing pilgrims and caring for them. This is our prayer. That is why we were so happy to meet the rare lonely Belgian pilgrim!

We would securely open our Albergue per the allowed dates and legislation/requirements if we had the rent amount secured.

We will even open for like just a few pilgrims, even just if local Spanish pilgrims walking the Camino. And besides that, we just love serving pilgrims… Hanging out with them and letting them join our community for a day!“

Still no pilgrims and the prospect of pilgrims any time soon dwindling but still a feeling of hope.

Because of your support this is the message we just received from Jan after we told her we were sending her the money she needed.

That is such good news!!!! We are very thankful for that!!!! Yay, there will be a shout of joy once I share this with our little community here in Spain.

Albergue Oasis Trails will now open when the region of Navarra allows it and they will be there to welcome what might just be lone pilgrims for awhile but still just as needy and still just as fullfilling for Jan and the many other Albergue owners along this amazing pilgramage across Spain to the incredible town Santiago de Compostella.